Starting to get things in order

Still have lots of unpacking to do - most essentials are unpacked, naturally.

Work has started on the basement apartment - guys arrive at 7:30am, so no sleeping in. The move is FINALLY over!

The move is finally complete. This our new home. So we got possession of our new house at 11:30am on Friday. We expected to get it much later in the day. We had to take beds apart and a fair amount of last minute packing still to do that we had expected to be able to do before getting the keys. So getting the keys early through a wrench in the works a bit.

So we got the keys and then preceded to get stuff we planned to move by car ready to go. I called my friend who lives on our new street as she hadn’t yet seen the house to come by when we got there – she offered to help us move things in her van. So we scrambled some more to have stuff ready to move – we still hadn’t taken the beds apart yet.

So we get to our new house, we had dropped DS at the friend’s place on the way to hang out with her DS while we worked – the old owners had left quite a bit of garbage by the curb – more bags than is allowed, so now we have to hold some back until the next week plus we will of course have our own.

The house is in severe need of a deep cleaning. They left several odds and ends everywhere, toothbrushes in the bathroom, a plunger, a baby cup in a cupboard, a tampon (unused in wrapper, thank GOD) in the powder room, a broom, soap, shampoo to name only a few.

I have enough problems with the amount of stuff we had to move – I didn’t need theirs on top of it.

We emptied the van and car and went back for more while my friend kindly offered to stay behind and start cleaning the kitchen.

At the old house, we dismantled the satellite dish (just before the rain started), the ceiling fan and loaded that and more into the car for another trip to our new home. Actually we went to our friend’s place first for dinner, then with kid & friends in tow, headed to our house to unload the final bit from the car.

Then back again at around 8pm to the old place to take beds apart and what not.

We all slept on our mattresses on the floor.

We were up at 6am on Saturday morning, more last minute packing, run to the coffee shop for coffee and bagels as we had no food in the house. My Dsis arrived at 7:30am to take my husband to pick up the truck. Then more last minute packing (I know it doesn’t sound like I had been packing for the past 3 months, but I swear I had!) Most of the last minute stuff was DH’s that I had been nagging him to get to. The first 3 of our movers (my nephew and his friends), arrived at 9:15am – the last one an hour later.

The move on Saturday took approximately 9.5 hours and 1.5 truck loads. Only after the movers had left, did I find out that we were not actually finished moving. Plenty had been left at the old house. After the first load, my sis, DS and I stayed at the new house to start unpacking. We managed to unpack a fair amount – why is unpacking so much faster than packing?

Anyway, I noticed several items that did not make the last trip. We still had the truck for Sunday so we would make another trip then – just us, to finish up.

On Sunday we woke at about 4am – neither of us having slept well – too sore was my reason. It was my 40th birthday. We got up, had a nice shower and had coffee. I sent DH to the corner store for bread so I can have something to eat. At 6am I decide to go back to bed as I am still so zonked. I slept better this time- whole bed to myself :) I woke at about 8am – I came downstairs and see that my DS & DH had just arrived back home from getting me birthday cards, roses and a flowering plant.

Then I call Dsis and ask if she can come later this afternoon to drive DH back after dropping off the truck – she agrees and also offers to help with the last load from old house. So we leave at about 9:30am – final load is nuts – garage is still full, basement is still full and not packed – I am furious – but what can I do – we go about gathering everything up – putting it on the truck and then cleaning the house. Even with Dsis’s help, it took us about 3 hours. Then back to unload it. Now fun part – we get back to new house (I'll have to stop calling it that soon), DH goes to move car from driveway to back the truck in and car doesn’t start – it is completely dead. Luckily, there is enough room to squeeze the truck into the driveway next to it and we unload. I am so tired and sore and now we have no car.

We still have so much to do but at least we are all moved in now. It’s all over the place, but all our stuff is here. We left all the keys at the old house and locked it – no going back now.

We had planned to do a bit of shopping on Monday, much needed groceries, new curtains and rods for the two windows in our bedroom, a dish drain tray just to name a few, but we can’t as we have to had the car towed to the shop first thing in the morning and get it fixed – it turned out to only be the battery but we were without a car until 5pm, so didn't get anything done.

At present we are still living out of duffel bags and boxes, but that will get better in the next couple days. The house is dirty, and cluttered with boxes but it is our’s, actually, both homes are ours until Monday when the new owners of the old place take possession.

My feet are killing me and earlier I scrubbed the deep soaker tub in our ensuite bath in anticipation of a nice soak before bed tonight to ease some aching muscles.

I'll do my best to post pictures and an update tomorrow.

I turned 40 today - kind of anti-climatic after the move :) 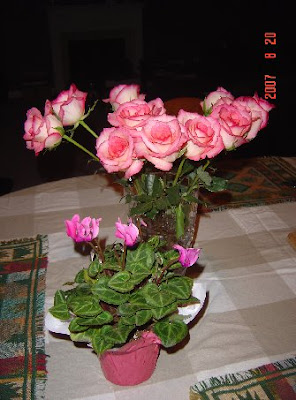 Where has the time gone?

We move to our new house in exactly 11 days (not counting today, which is almost over).

I am starting to panic but trying to keep it under control. I still have plenty of packing to do, but much of it is last minute stuff.

I have huge lists that I am constantly referring to. Have I done everything?

We are also trying to hire a contractor to finish our new basement into an apartment for my father in-law. We had one guy that sounded decent but he seems to have disappeared. Haven't heard from him in 2 wks and his cell doesn't have voice mail. Sheesh.

I am so excited to get into our new place. I am especially excited about my new sewing room/office. I really want to get back to sewing and even knitting. I just hope I still have the urge after the move is done.

We will have 2 weeks in the new house before school starts. I have finally decided to put J into the catholic school - found out it also has an onsite daycare so that works for K dropping him off in the morning and then picking him up after school.

We may also have guests for Labour day weekend - will find out this week I hope. I am kind of dreading that - too soon after the move and all.

And about a week after school starts, I will start looking for work again - will have to work out the logistics of getting to and from the GO station each day - but I'm not going to worry about that now - hoping to win the lottery before then and not have to go back to work :)
Posted by Kim at 12:31 1 comment:

So I decided yesterday that I really need to get out of the house - I am sick of packing. I am getting sick of my 10 yr old telling me how bored he is. I need out. So I called my sister up and asked if she would take me shopping. I want to make a fabric covered memo board for my new office/sewing room in our new house.

A nice apron, a little small for my ample waist but I can use it as a template for a bigger one later. It was $2.99 This pc of pink floral cotton fabric - about 3 metres I think - it was $2.99 - I will maybe make an apron out of this or just use it for quilting. And finally this pc of floral tapestry - again approx 1 metre for only 99 cents - not sure what I will do with this yet, but I will find a use for it - it is so lovely! It is folded in half widthwise in the pic - so is actually double the amount shown. These are all new fabrics by the way.

On top of all that - there I got a discount so that all that, including taxes cost me just under $10.

We then went back to Dollarama to get some thin ribbon to match my memo board fabric - could only find one roll in a nice berry colour for $1 - I hope 3 metres will be enough.

We never did get to the fabric store as I didn't need to go. Fabric there would have probably cost me at least $7 a metre!

In case you are wondering about my memo board, what I am going to do is.....cut a large sheet of 1/2 inch thick styrafoam (which we already have), and two pcs of cardboard the same size for the back, I will place the styrofoam on the cardboard, wrap in fabric and staple (with staple gun which I still have to buy) to the cardboard back. Then I take the thin ribbon and staple from the back, across the front in a diagonal grid patten. I'll then put flat thumbtacks (still have to buy), in all the places the ribbons cross - with me so far?

Then instead of using tacks to hold things up on the board, you just kind of tuck them under the ribbons. I'll try to post a picture when I get it finished.
Posted by Kim at 10:38 No comments: