It was pretty chilly here last week but we have still managed to keep the heat turned off.

J wears a fleece hoody to school and with the cooler temps, it is just not cutting it anymore. The wind goes right through it.

We decide to go shopping for a fall coat on Saturday - we got up, went to breakfast at our local diner, they have a great breakfast for a decent price. And then we were off to the big mall in the next town/city over (The Oshawa Centre).

We went to The Bay first but didn't have any luck, they only had winter coats out (his still fits from last year thank god.)

The we decided to look at Sport Chek. I found a really nice Columbia jacket that was marked down from $139.99 to $49.99. It was his size too. After trying it on, we decided it fit him a little too snug, the larger size would be better. We scoured the racks and DH finally found the next size up - it fit a bit loose but J likes it better that way and I hope to get another year out of it. When we go to the cash the final price with taxes was $32 score!

And of course since he now has a nice fall jacket, the temps have gone up! All this week it is supposed to be nice and mild :) Means we still don't have to turn the heat on.

I still have to switch J's bed to flannel sheets - he sleeps with Peanut, so they keep each other warm  :)

I am making spaghetti and meatballs for dinner tonight using this recipe. It is the first time I have ever cooked the meatballs right in the sauce. I also made another 2 dozen meatballs and froze them raw.

Tomorrow will be leftovers of some type or something easy as J has cadets at 6:30pm.

I will be making chili on Wednesday as well - a big pot so I can freeze some. We will have chili on Wed and chili-dogs on Thursday or Friday. J doesn't like chili so will eat something else on the chili night and plain hotdogs on the chili-dog night.

I still have not heard about that job I interviewed for but I told a fellow tech writer about it. She submitted, did the test, was interviewed and they they contacted her for a different role they have available. So she is being submitted for that instead. She was told they are hiring approx. 22 ppl and that the positions are still open, so hopefully I still have a shot.

Still they are not very organized. They sent her the info for the test then called her up one day out of the blue to interview her without prior scheduling it with her.


I just checked out the book The Power from the library. Maybe you have read the prequel to this one, The Secret? It is all about the power of attraction - not to each other but to what you want out of life.

The Power just builds on that same theory. In a nutshell...what it says is: what you put out there, is what you get back. Put out positive energy, get positive results back. Be negative and send negative energy out into the universe, that is what you will get back.

I have to make a concerted effort to always think positively. It is too easy to get caught up in a complaining cycle, which is negative.

On a positive note...that work at home job I interviewed for a couple weeks back? I hadn't heard back from them so assumed they were not interested and emailed to confirm. Seems they are just running behind schedule and will be deciding this week, so I am still in the running.

Last night we ate leftovers and I had leftover pasta again for bunch this morning. Gotta stay on top of using those leftovers.

I took 2 chicken breasts out of the freezer and will make these Crispy Chicken Fingers tonight for J & I. We will have a noodle side dish and salad with it. I'll let you know if they turn out well, they sure like yummy!


UPDATE
I made the chicken fingers only I left the breast whole after flattening. They were really good - I seasoned up the flour with seasoning salt, garlic powder and a Parm & herb seasoning blend. Not something you want to make too often as you do need a fair amount (1/4 cup) of oil to fry them in.
Posted by Kim at 11:41 2 comments:

Time to eat from the pantry/freezer again

We have too much food and too little money - which is not as bad as it could be, I suppose.

I need to find a job, but that is proving more difficult this time around.

Like I said, we do have a lot of food in the pantry and the freezer which is great - we just have to work on using it up and not buying anything other than essentials each week.

Just got back from grocery shopping a couple hours ago - didn't do too badly. $88 and change. I am trying to keep it under $100 each week, we can probably even do better than that. Hubby did pick up pork ribs because they were on sale, and we got 2 cases of 12 cans of apple juice for the kid, came to 50 cents for a large can, that usually about a buck each. He should have apple juice for awhile.

Dinner tonight will be leftover Arroz con pollo (for me & DH) and leftover alfredo penne for the kid.

Hubby is going out of town tomorrow and will be back Tuesday evening, so Monday dinner will be just the kid & I. I'll probably doctor up some mini frozen pizzas, I add green olives and a bit more cheese.

We have 2 large packs of lean ground beef in the freezer, as well as several 1 lb packs. I am thinking to make chili, some mini meatloaves, a sheppard's pie and meatballs from these. The ribs DH just bought will probably be next Sunday's dinner when we have his father over.We also have various chicken parts, small pork tenderloin, and other frozen odds & ends.

We definitely have enough food for a couple weeks of meals. I really need to get planning and only buy the bare essentials, bread, milk, eggs, veggies & fruit.

We had Applefest here in Bowmanville this Saturday and I picked up a 4 liter basket of Mutsu apples, these are very firm/crisp and a bit tart. So we have enough apples for a week or so too.

Look for some creative menu planning in the days ahead :)
Posted by Kim at 11:05 1 comment:

Yes! I have once again been contacted by CSN Stores to review a product of theirs.

I get to pick the product, but it is SO hard!

They literally carry everything there! I mean everything!

You can find purses & bags, kitchenware, home decor and all kinds of furniture, including an ottoman coffee table. These are great dual purposes pieces.

DH came home from his business trip on Friday, having picked up his Mother on the way, from her sister's, where she had been visiting for 3 weeks. He also brought home a cold which I caught on Sunday.

Monday I had a telephone interview. It was shceduled at 11am. Dh had to drive J to school as there was a soccer tournament he was in and he had to be there early. Once the boys left, I climbed back into bed for an hour because I felt so crappy. I got up at 9:50 am and decided to make some tea and then research the company I was interviewing for.

The interview people called me at 10 am, they are in New Brunswick and it was 11 am there. I asked them to call me back in 10 minutes and scrambled to get ready.
The interview took 45 minutes (I think it went well) and then I had to do an online written test which took 2 hours and 15 minutes then I again climbed back into bed. I should hear something by the end of the week about the job which is completely work-from-home YES!

J's school took 2nd place in the soccer tournament out of eight teams. J came down with the cold too. He has been home the past 2 days and looks like he will be home again tomorrow. I too am still feeling crappy - this cold is really hanging on.

A good friend lost her mother on Tuesday. She had been ill for awhile, but it is still devastating.

We had a soccer game tonight with J's house leage coach and his (coach's) school team (coach teaches at and coaches at a private school). So the private school grade 10 team and our grade 8 team went head to head tonight. J played but probably shouldn't have. Anyway, we were creamed 7-0.

Last week I called the VP at J's school to let her know he was being bullied on the school bus (as he has been for the past 3 yrs). She said she would look into it and spoke to both boys. She determined that J has said some things in retaliation for the bullying so she punished both boys by moving them on the bus. Even though this kid is bullying J, pushing him etc...they get the same punishment. I called her up and said I was not impressed with how she handled the issue as we were the ones to call her. She said she would again look into it and call me back - that was Friday and again I have not heard from her.

It is Thanksgiving this coming Monday in Canada. I went and bought all the fixings but don't much feel like cooking any of it right now - hopefully will feel better by Sunday.

It has cooled down quite a bit here. We haven't yet had to turn on the heat, I want to hold off on that as long as possible but may end up putting the flannel sheets and electric blanket on the bed this weekend.

Also, Saturday marked 8 years since I quit smoking.
Posted by Kim at 16:23 1 comment:

There was a Boston Terrier meetup on today. It was a fund raiser for the Boston Terrier Rescue group. We decided to take Peanut and my friend Lisa also came with her Boston Maggie. All the dogs had a great time.

It is in an enclosed area and you just let the dogs loose. Peanut has a solid pink harness on, so we could spot her once in awhile.

Pics with a couple videos as well 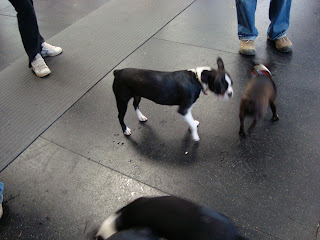 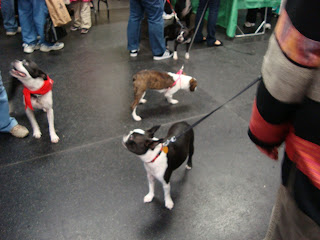 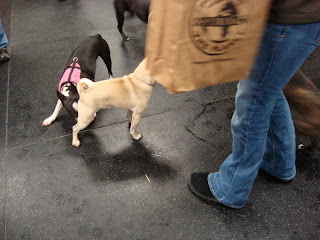 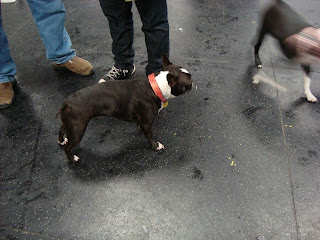 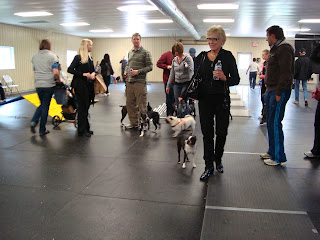 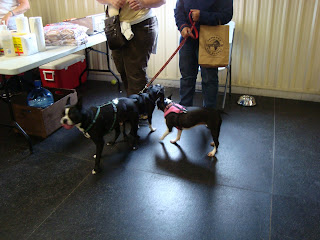 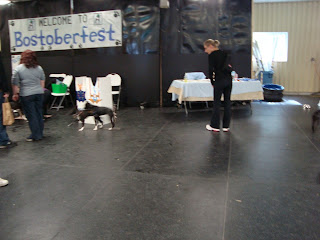 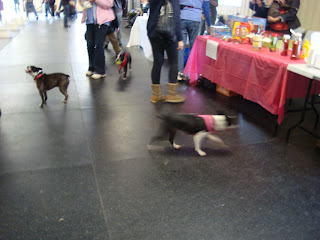 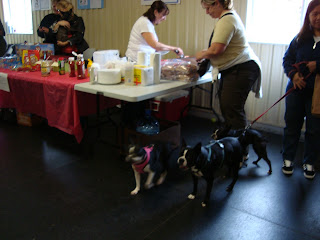 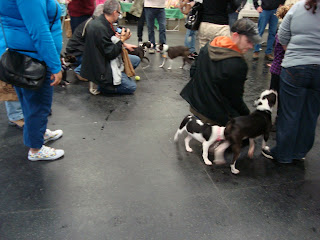 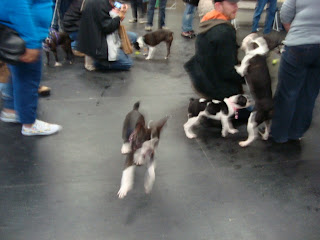 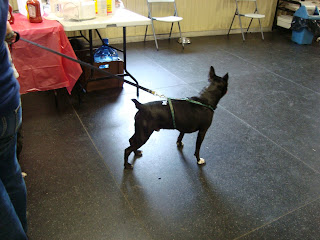 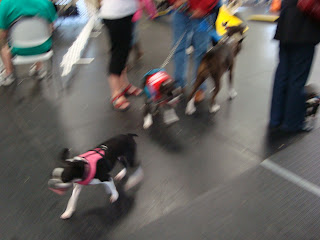 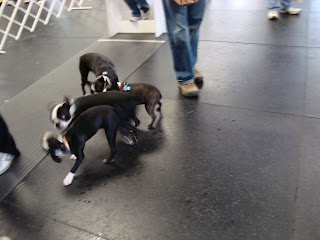 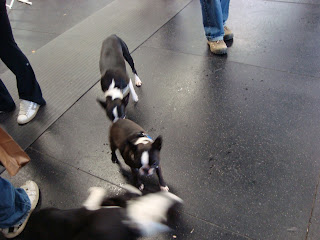 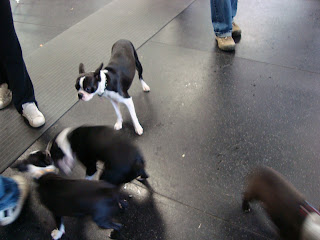